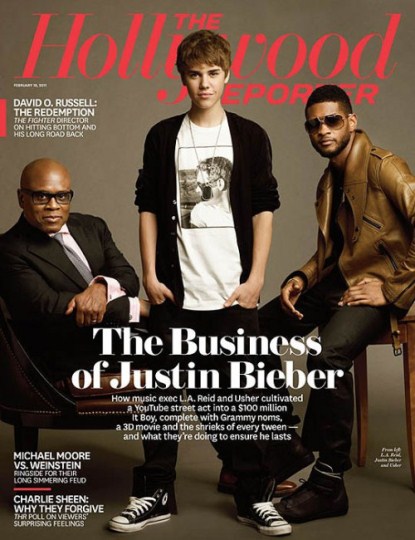 Yes another Justin Bieber cover – he has been on a blitz this month.  Justin Bieber and Usher cover this week’s issue of  The Hollywood Reporter.  The cover titled ‘The Business of Bieber’  How Usher and L.A. Reid cultivated a YouTube street act into a $100 million it boy, complete with grammy noms, a 3D movie and the sheiks of every tween — and what they’re doing to ensure it lasts.

The story is clearly about  Justin’s development and the approach he and his team have taken to turn him into a superstar.  They have been successful from Justin Bieber nail polish, to albums and 3D movies Justin is everywhere.

Justin recently said about his future:   On his future, Justin says, “I don’t like to focus so much on the future. Right now I just want to love what I’m doing, and that’s making music and making people smile. I hope I get to do that for a long time to come.”

You can catch Justin at the Grammys this weekend. Wonder if he will show up with Selena Gomez?