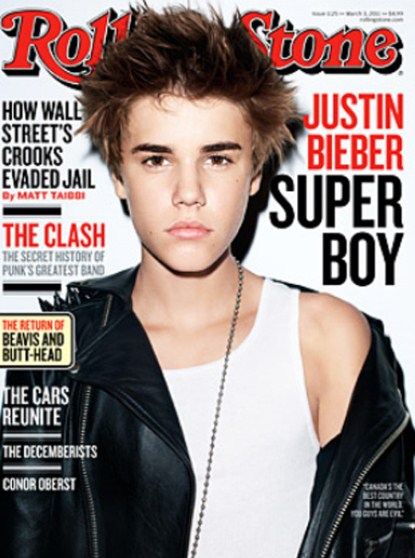 Justin Bieber, 16, is on the cover of Rolling Stone. Rolling Stone decided to give Justin a new hair style.  Justin’s usually styled do has been made to look like he stuck his finger in an electrical socket.  The cover was shot by Terry Richardson and it will certainly get the beliebers talking.  Even more shocking is the interview where the Biebs talks about politics, his take on sex and girls.  Below are a couple of highlights of the interview – for more visit Rolling Stone.

Justin’s take on sex – I don’t think you should have sex with anyone unless you love them,” Bieber says. When asked if he believes in abstinence until marriage, Bieber – who is reportedly dating fellow teen star Selena Gomez – seems wary: “I think you should just wait for the person you’re…in love with.”

Justin on his voice changing – Bieber’s voice began to change on his last tour. He’s now working with a vocal couch, which involves doing 20 push-ups before before a session to warm up his chest. “He’s got a nice tone tone to his voice now,” says his vocal coach Jan Smith. “It’s a good texture, but it doesn’t sound like what his fans think he sounds like. He’ll get four octaves eventually. He’s still young.”

Justin on abortion –  “I really don’t believe in abortion,” Bieber says. “It’s like killing a baby?” How about in cases of rape? “Um. Well, I think that’s really sad, but everything happens for a reason. I guess I haven’t been in that position, so I wouldn’t be able to judge that.”