Kacey Jordan Speaks Out Again On Her Only Topic – Charlie Sheen 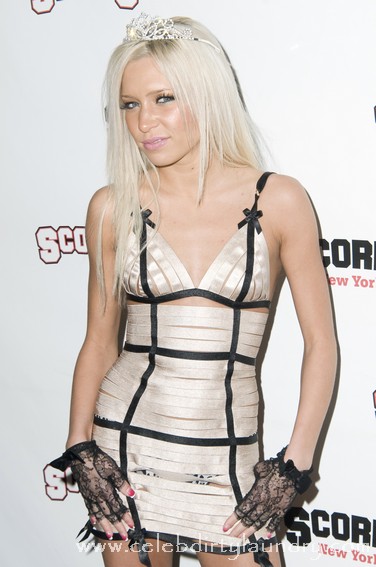 At the risk of making a cheap pun let me say that Kacey Jordan is a one trick pony.  The adult film star/prostitute who partied with Charlie Sheen before he was hospitalized in January, is speaking out – looking for more publicity after her suicide attempt in a Chicago hotel earlier this month.

Kacey spoke about the aftermath of that infamous night at Sheen’s Los Angeles multi-million mansion and implied that she knew about the actor’s plans for the future.

“I think Charlie is now working on making himself healthy and happy,” Jordan said.  “He told me was ready to retire from Two and a Half Men before any of this and that he just wanted to live at home with his Goddesses.  He ultimately wanted to have a family, be a drug addict and a sex addict.”

Jordan said her presence that evening had a real impact on the actor getting clean and his future.  Its amazing if she can actually believe that she was anything other than another ‘hired hand’ to Charlie or that she made a difference.

“I feel if I hadn’t opened up about Charlie, he never would have gotten the help that he needed,” Jordan said.  As if it weren’t for Jordon nobody would have known what Charlie was up to?  Now the bimbo is trying to portray herself as a saviour – what a bad joke – comes in as a highly paid prostitute, smokes crack with Charlie, does whatever else, and now claims that it was her big mouth selling her story all over that got Charlie on the right track?  Grow a brain Jordon.

Get a load of this quote from the evil Kacey:“At the time I was afraid to tell him to stop doing so much crack because he is so much older.  It would have been like telling your father not to do that.”   Sheen was taken to the hospital that night after an urgent 911 call and Kacey said, “I was so afraid that I would be held responsible for his death because I didn’t make him stop and I was there.  I was really afraid.”

She was especially concerned because she’d cashed the substantial check Charlie had given her.  Jordan was paid a whopping $30,000 for her company that evening and later blabbed all about Sheen’s use of drugs.  Since that night, Jordan was treated at Chicago’s Northwestern Memorial Hospital after what was widely reported as a suicide attempt.

“I watched as Charlie went on his binge, the after-effects of the drugs and now I think he is back to himself and probably could go back to work on Two and a Half Men,” Kacey said.  “He’s making fun of himself and now he’s getting the attention he craves.  He wants loads of attention and so I am happy for him that he is going on tour.

“I know he ultimately wants to be a good dad, that is his dream, and the kids being taken away, I’m sure hit him hard.  “My advice to Charlie is to stay in contact with the ones he loves and stay busy, be strong.  “The tour will be great, I think he’s on the road to recovery, although it will always be a struggle with his addictions.”

There you have it – words of wisdom.