Kat Von D Got A Tattoo Of Jesse James’ Face! 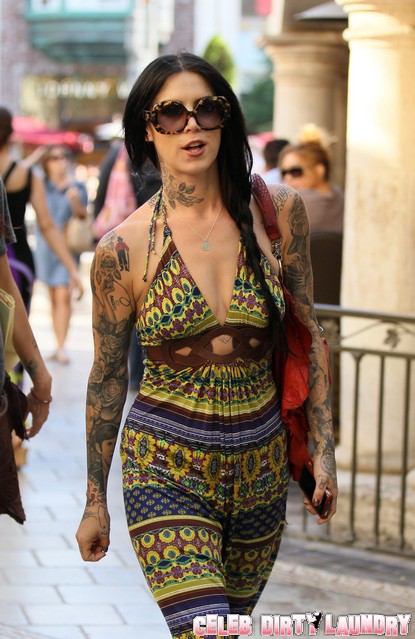 Well, no one can say that Kat Von D is the sharpest tool in the shed, right? Not after hearing about this boneheaded move!

Kat and Jesse James’ breakup was just revealed yesterday, after the L.A. Ink star took to her Twitter to confirm the rumors. She tweeted, “I am no longer w Jesse, and out of respect for him, his family and myself, that’s all the info I’d like to share. Thanks for respecting that.”

Now, we’ve learned that she did something crazy with her choice of ink! She got Jesse’s face tattoo’d on herself! What?!??

In a sneak peek of her show, it was revealed that Kat got a childhood photo of his turned into a tattoo — on the left side of her body! RadarOnline reports:

“I’m getting his face tattooed on me and I have no idea how he’s going to react,” Kat says in the clip.

When Jesse arrives at her tattoo shop he jokes “I feel like I’m in court,” as Kat tells him she’s nervous about giving him his “surprise.”

He seems happy with her new ink – saying “you’re crazy,” but ultimately telling Kat “yeah” he loves it, and “I love you.”

Perhaps foreshadowing the future, Kat says she was scared about Jesse’s reaction. “I thought you were going to tell me you were breaking up with me.”

Wow, if that’s not a foreshadowing of events, then I don’t know what is. Jesse wanted the commitment of marriage, but that kind of commitment? Somewhere in the world Sandra Bullock is having a hearty laugh over this one.

Did you see their breakup coming? Are you surprised that she got a tattoo of his face on her? Let us know your thoughts in the comments!