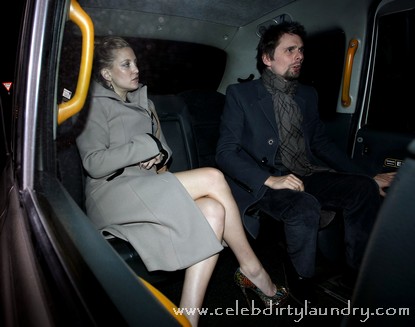 Kate Hudson, 31, and her baby bump with British rocker Matt Bellamy, 32,  of Muse are pictured above arriving back at their hotel after dining at Scotts restaurant in London, England February 3rd, 2011.  Kate and Matt have been dating since spring 2010.  They announced in January 2011 that Kate is pregnant with their child.  It will be the second child for Kate.  Kate has said that Matt is the first Brit she has ever dated.  She also says there is a huge difference between American men and British.

Meanwhile Kate can be seen in A Little Bit Of Heaven alongside Kathy Bates.  The movie is a comedy about a guarded woman who finds out she’s dying of cancer, but when she meets her match, the threat of falling in love is scarier than death.  The movie is total schmaltz and I could have given it a miss – it was A Little Bit Of Hell to sit through it!