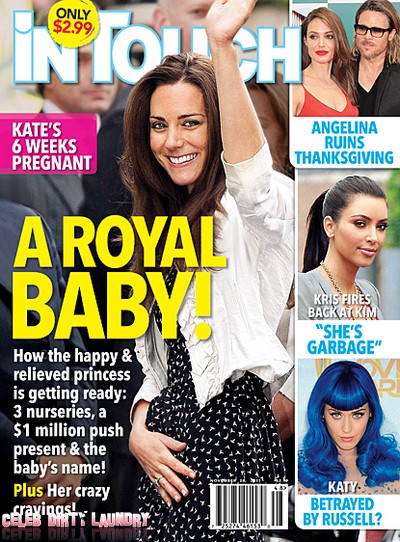 The current issue of In Touch features the cover story ‘A Royal Baby.’  The magazine claims the Duchess of Cambridge Kate Middleton is expecting her first child with her husband Prince William.  Furthermore, they claims she is six weeks pregnant.  They have the story on how happy Kate is and her preparations to get the three nurseries ready.    They also claims she has a $1 million push toy for the baby and they know the details of the baby’s name.  My In Touch has been busy this week.   Not to leave out anything they also have the 911 on what cravings Kate has.

It has been believed by royal watchers for quite some time that Kate and Prince William have been trying to produce an heir. Kate’s recent weight gain and private visits to doctors have increased speculation that a royal baby will be on the way soon.  When Kate shunned champagne in favour of water as she hosted her first solo royal engagement at Clarence house last week, it looked more likely than ever that she was pregnant.  She was also  caught refusing to taste a peanut paste product while at a UNICEF aid depot in Copenhagen.  We would not be surprised by a formal pregnancy announcement soon.

Also featured in this week’s issue Kris Humphires fires back at Kim Kardashian after she files for divorce after just 72 days of marriage.  The magazine claims he has said Kim is garbage.  Nice one Kris!

For all this and more pick up the current issue of In Touch!

Cover credit to In Touch