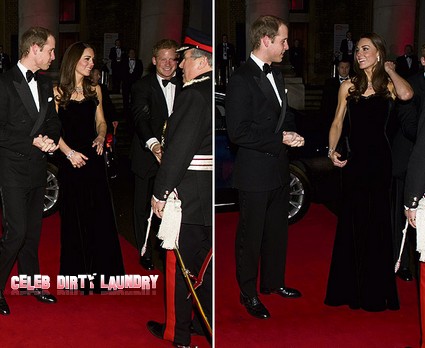 Kate Middleton is one of the most closely monitored royals ever and usually gets high marks for looking great. Ever since Kate married Prince William at Westminster Abbey in April and acquired the title of Duchess of Cambridge her dresses have been drawing the most attention. Her latest Alexander McQueen gown has people raving that Kate has hit a new fashion high.

Kate stepped out in a stunning black Alexander McQueen gown for the Sun newspaper’s Military Awards Bash in London this week, drawing comparisons to an outfit worn by Princess Diana in 1981. On that occasion, the Lady Di wore a black gown with ruffled edges to a fundraiser at The Royal Opera House – her first engagement with husband Prince Charles, according to Marie Claire magazine.

Although the outfits share similarities, Diana wore satin, while Kate opted for velvet. Despite being only 19 at the time, Diana made headlines around the world and soon became an international fashion icon, though Kate was given that title almost immediately after announcing her engagement to William. Diana’s dress was designed by Elizabeth Emanuel, who said of her outfit, “The transformation was incredible – she looked like a movie star.”

The gown sold for almost $400,000 to a fashion museum in Chile at an auction earlier this year.

One thing that both outfits had in common – the signature diamond and sapphire engagement ring that Prince William passed onto Kate following his mother’s tragic death. That ring has become a Lady Di icon.