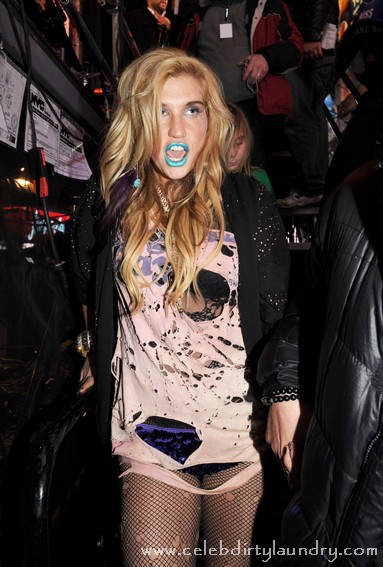 Ke$ha was interviewed recently by Eric Spitznagel and had much to say about the big show she puts on.

She compared her first album, the mega-smash Animal, with the Beastie Boys’ 1986 debut Licensed to Ill. The two records definitely share some musical DNA, with their frathouse celebrations of partying, booze, and casual sex. But then again, the Beastie Boys went on to make mature and ground-breaking albums like Paul’s Boutique and Check Your Head, while Ke$ha’s latest, the EP Cannibal, just offers more of the same dry-heaving, dry-humping antics.

Ke$ha  was in Nashville, preparing for her upcoming “Get $leazy” tour (her first as a headliner), which kicks off in Portland, Oregon next Tuesday, February 15th. In a bittersweet coincidence, I also spoke to her as she should’ve been making plans to attend the 53rd Annual Grammys, which airs this Sunday, February 13, at 8 p.m. on CBS, an awards ceremony in which she was unfairly snubbed. I say “unfairly” because, come on, it’s the Grammy’s. This is a show where Neil Young, Jeff Beck, and Tom Petty have all been nominated and it’s not 1978. Katy Perry is up for multiple awards, and the difference between her and Ke$ha is something that even their respective mothers would have a hard time explaining. She insists that she’s not bitter, but as with everything Ke$ha does, it can be difficult to tell when she’s being ironic.

Eric Spitznagel: On Dick Clark’s New Year’s Rockin’ Eve, you told Ryan Seacrest that your resolution for 2011 is “to not be a douchebag.” How’s that been working out for you?

Ke$ha: Thus far, I think I’m doing a pretty decent job. I’m not saying I don’t fuck up here and there. But for the most part, I think the douchery has been kept to a minimum.

If you’d cut back on the douchiness a little earlier, do you think you would’ve had a better chance of getting a few Grammy nominations this year?

Who knows. Probably not. But it’s not that big a deal.

You don’t want a Grammy?

Of course I do. I was disappointed that I didn’t get nominated. But I’ve only been around for a year. I’m friends with the Black Keys, and they were nominated for the first time this year. And they’ve been around for a decade. That’s like half my life. So I really can’t be a brat about it. I plan on making a lot more records, and hopefully one of them will be Grammy worthy.

What’s your glitter budget for a typical year? It’s got to be in the thousands, right?

Honestly, it’s pretty exorbitant. It’s probably more like a few thousand every month. If you come and see a show of mine, there is no shortage of glitter. By the end, everyone from the back of the auditorium to the very front is covered and potentially choking on glitter. I am shooting glitter from glitter guns and out of every orifice in my body. It’s really a big part of what I do. It’s my goal to cover the planet in glitter and take the fuck over. I can’t do that if I don’t have a shit-ton of glitter.

If your songs are to be believed, your life is one big lost weekend of alcohol poisoning and recreational sex. But it’s all just a metaphor, right? It’s like when Bob Dylan sings about working on Maggie’s farm. It’s not a literal representation of your life, is it?

Everything I write is based on something I’ve personally experienced, or things that my friends have experienced that I just find horribly entertaining. One of my favorite songs on my first record is about this bitch who stole my car. I also did a song called “Dinosaur,” which is about old creepy guys with bad hairpieces who hit on me in bars. I think dinosaurs are the male equivalent of cougars.

What about that infamous line in “Tik Tok,” where you brag about brushing your teeth with a bottle of Jack Daniels?

What about it? I do that all the time.

When something like that happens, what’s going through your head? Are you like, “How’d this bottle get in the bathroom? What the fuck am I doing? Oh my god, what’s happened to my life? I’ve got to get my shit together!”

Absolutely not! Jack Daniels is an anti-bacterial and it’s way better than morning breath. Let me put it this way, if you wake up naked in a bathtub and you have the choice between rinsing out with Jack Daniels or trying to make out with some dude with morning breath, I would recommend picking up the Jack.

I think Ke$ha and Bristol Palin ought to get together and hang out.