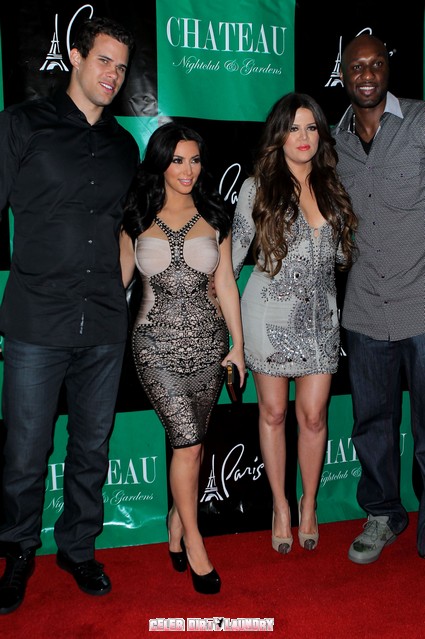 Khloe Kardashian celebrated her 27th birthday at Chateau Nightclub and Garden at Paris Hotel and Casino Las Vegas, Nevada last night June 17th, 2011.  In attendance was her husband Lamar Odom, her sister Kim Kardashian and her fiancé Kris Humphries and her brother Rob Kardashian.  Khloe’s real birthday is not until June 27th, 2011 and many suspected that the party was actually going to be a Bachelorette party for sister Kim.

Meanwhile Khloe who says she had the worse bachelorette party ever and is planning to pay back sister Kim. Kim is engaged to Kris Humphries and Khloe says she is planning a sex filled party that will make Kim cringe.  Khloe has mentioned she may have penis straws and a little go-go dancer to embarrass her sister.  How fitting for the KarTRASHian sisters!  Rumor has it Kim may get married as soon as July 4th, 2011.  So Khloe better have that bachelorette party soon.

Click on the thumbnails below to enlarge 30+ photos of the Kardashian family at Khloe’s birthday party!