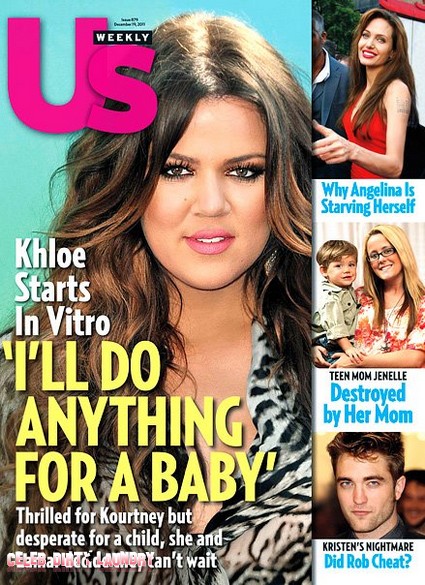 The new issue of US Weekly has the cover story ‘Khloe Starts In Vitro – I’ll do anything for a baby.’  Khloe Karadashian, 27, has been married to Los Angeles Lakesr forward Lamar Odom, 32,  since September 2009.  So far the two have been unable to conceive.  Khloe has made no secret of the fact that she wants to conceive.  After sister Kourtney Kardashian announced last week she is pregnant for a second time, Khloe is even more desperate to have a child.   Khloe has decide to Khloe has started preparing for in-vitro fertilization treatment to help her and Lamar conceive.

The magazine reports that even though Khloe is thrilled for Kourtney, she and Lamar have decided they can’t wait any longer.  In-vitro costs around $10,000 to $15,000 per treatment but they feel it is worth it.  The two have been trying to get pregnant but nothing has worked so far.  Khloe is feeling really pressured to conceive.

Also included in this week’s issue they have all the details on why Angelina Jolie is starving herself and Kirsten’s Nightmare, did Rob Cheat?  The magazine have been  running with the story for months not about Angelina and her rumored anorexia.  Angelina has denied all claims and says she is just naturally think.  As to the rumors of Robert Pattinson cheating on Kristen Stewart that all stems from his their now infamous ride with Sarah Roemer in the back seat of an automobile?  We doubt it is true, but you never know.

To find out all this and more, pick up the current issue of US Weekly.