Where Did Robert Pattinson & Sarah Roemer Go – And What Did They Do There? (Video & Pics) 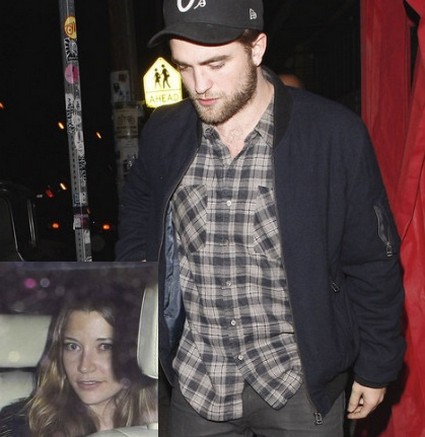 Where did Robert Pattinson and Sarah Roemer wind up on Saturday night after their now infamous ride together in the back seat of an automobile? Did our hero, who is riding the wave of record breaking Breaking Dawn success use the opportunity to take Sarah for a ride… or did they ride each other? Kristen Stewart gave Robert every opportunity to be unfaithful by being away in the UK filming Snow White and the Huntsman.

Robert and 27-year-old actress Sarah were out partying at La Poubelle bar where they supposedly met up with mutual friends – was this just a cover for a hot date? A source inside the bar reports: “Rob was literally fending off advances from girls, left and right. Every female in the bar wanted to get close to him and for the most part, he politely ignored them but one girl caught his eye and she left with him!”

Sarah starred alongside Kristen Stewart, in the 2007 short film Cutlass and also had a part in Disturbia with Shia LaBeouf, the famous bar brawler! Sarah was in the films Locked Up, Waking Madison, and The Con Artist last year. Her TV credits include The Event and Hawaii Five-O. Sarah started out as a model when she was discovered in her hometown of San Diego in 2000.

What we know for certain is that after partying, and presumably drinking at La Poubelle, Robert and Sarah took off together in the back seat of a car. Where they went and what they did there is nobody’s business but theirs… and Kristen Stewart’s of course!