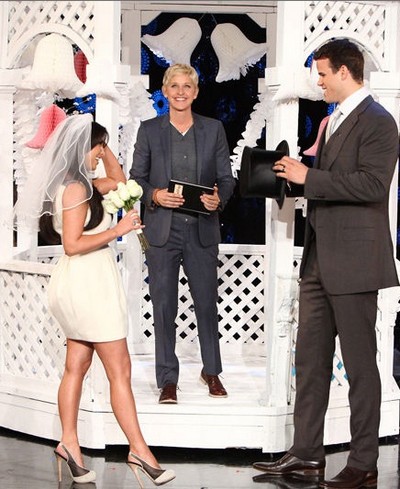 Kim Kardashian and Kris Humphries who recently got married decided to renew their wedding vows already on the The Ellen DeGeneres Show.  The couple who got married in a media circus August 20th are milking the wedding for every thing they can.    They went through a mock ceremony on Ellen’s show where she officiated because everyone wants to see Kim married right? Not!

Kim also shared details of her big day and what she would have done different.  Let me guess, make more money and pimp more things out LOL.  Kim revealed “I would say longer after party, but I was so crazy for an entire month…I literally I went crazy. It was so stressful.”   She goes on to claim that because of the stress she would have eloped.   Do we believe that?  NO!  Her wedding was a financial coup for Kim, 30, and we know for Kim it is all about the money!

Meanwhile OK! Magazine is claiming that Kim and hubby Kris have had their first big fight.  They are claiming there is a lot of family tension going on.

So what do you think?  Would Kim really have eloped?