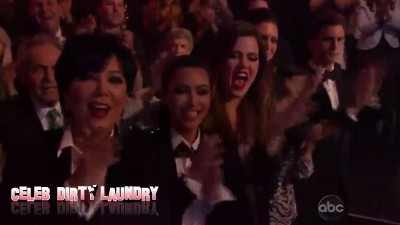 Kim Kardashian is out of hiding and in the audience of Dancing With The Stars – along with her mercenary mother, Kris Jenner. This must be good luck for brother Robert Kardashian as he just posted perfect 10’s on all 3 judge’s scorecards for an almost unheard of maximum possible 30 in freestyle dancing.

It great to see that Kim is recovering from the shock of her sudden and unexpected divorce filing.  Oh wait… she was the one who initiated the divorce – so I guess shock and surprise are not amongst her current problems. Making a mockery of the the institution of marriage is what Kim did – after making millions of dollars off of her much publicized wedding where she married Kris Humphries. Well at least she married him for 72 days. Now Kim is experiencing the backlash of her nasty fake marriage.

Rob Kardashian chose to perform the Waltz – a dance style he has not yet performed. On tonight’s tenth episode and the part one of the finals of Dancing With The Stars couples will have to impress the audience with two routines. If you missed tonight’s performances you can read our official recap herev!

Rob who oddsmakers are giving a 4/1 odds to win said he feels great going into the finals. Cheryl said about Rob, ‘he wants to go all out for this. We live, we eat, we breathe this competition.’ Rob said his partner Cheryl Burke will choreograph a routine that fits his personality — probably ‘old soul.’ Bruno came to give Rob some tips before his performance and he thinks Rob has the potential to win.

Rob’s second dance was even better than his first. He is a winner – and is looking great to make it into the finals. He is also modest and well-mannered. Is he really Kim’s brother and Kris’ son?