BY Robyn Good on November 21, 2011 | Comments: 10 comments
Related : Dancing With the stars, Dancing With The Stars Season 13, Reality TV, Recap 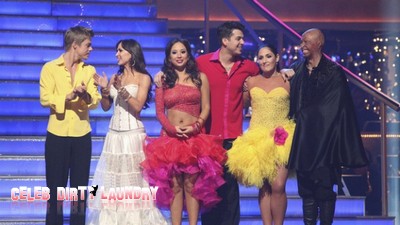 Tonight is the tenth episode of Dancing With The Stars and after weeks of riveting performances and shocking eliminations the FINALE has arrived.  Stay tuned as we cover the official recap of show with up-to-the-minute details. ABC’s hit show DWTS will come to a close this week with two days of performances.  The competition has really heated up in the ballroom. and the contestants will be battling it out for our votes.  The four remaining contestants hinted about this week’s performances but did not give much away.  Last week World Cup Soccer player Hope Solo was sent home.  If you missed last week’s performance show you can read the official recap of the episode here!  If you missed the result show you can read our recap here!

On Tonight’s one-hour performance show, all three couples will compete against one another with two dances. The first number is a style the couples have not yet done. Then, all three contenders will perform the always popular and fan favorite Freestyle dances.

Who will win the mirror ball trophy is anyone’s guess.  J.R. Martinez was the favorite but with his ankle injury it leaves room for Ricki Lake and her partner Derek Hough to take the trophy.  Rob Kardashian is the weakest of the finalists but he has a huge fan base and everyone loves the underdog so you never know.    Tune in tonight to see all the exciting performances, and we will have videos of the performances once they are released.

ROUND 1- A Dance the Contestants have not performed during the season.

Judges comments: Carrie Ann said: You are looking fierce, there is a difference between performing the dance and living the dance, tonight you lived the dance. Len said: Action packed performance, a dance deserving of this final. Bruno said: A cha cha cha running at full steam, very clean.

Bruno said: You were flowing and you were glowing. You messed up a little bit of the footwork. It was very good. Carrie Ann said: You are the male version of Cinderella. Tonight it is fluid and flowy, wow. Len said: You had good holds and good posture. It was simple, but simply beautiful!

Carrie Ann said: The magic of JR everyone loves you, they just fall in love with you. But I think your musicality was off. Len said: It was brave that you did the solo. When you dance with a professional you can keep on track. JR it was not that good. Your enthusiasm got the better of you. Bruno said: I liked the mood you set, the intensity was right on and the latin feel was there and the character was there.

Judges comments – Len said: It was fun and entertaining, well don. Bruno said: Explosive coming out, the most demanding of the dances. The Salsa and The Quick step together is difficult. You nailed it! Carrie Ann said: I loved how you mixed the two dances like Bruno said, it was fluid, it was good. Good job!

Judges comments – Bruno said: Brilliant execution, brilliant performance, you picked it up at the right time. Carrie Ann said: you blew me
away and only people who blow me away with the freestyle get a ten! Len said: You just given you’re all, you should be proud. You delivered, great job!

Carrie Ann said: JR you brought it, that is the way to come back, Congratulations. Len said: Fantastic, way to go. Bruno said: you were wild and beautiful with animal physicality, it was tribal what a way to come back, congradulations!

That’s it for the evening, join us tomorrow night as we live blog the finale and let you know who wins the Mirror Ball trophy.  After tonight’s performance Rob Kardashian is at the top of the leaderboard with a 57 and Ricki and JR are tied at the bottom with 54 each.

After tonight’s performance who are you rooting for to take the Mirror Ball trophy home.  Sound out in the comments below!