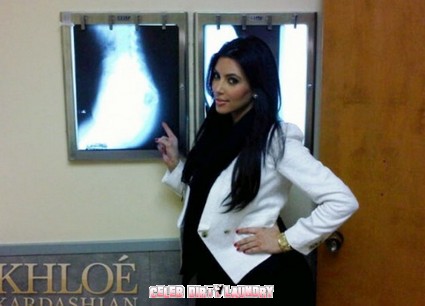 Reality star, Kim Kardashian, 30,  is tired of the rumors that her bum is not hers but it is the product of bum implants.  Recently on ABC Nightline they directly asked her about the rumors she had implants and she had to defend “the junk in her trunk.” She said:  “Those are just rumours, I don’t think I’ll ever outlive them. “For the record, no butt implants. No butt injections, no anything to my butt.”

So Kim decided to go to the doctor and try to put the rumors at rest.  Khloe Kardashian accompanied Kim to the doctor to get the X-Ray and posted it on her website saying: “Hey dolls. The PROOF is in the X-ray. Kim’s ass is 100% real!!!”

Kim tweeted on her twitter: “Haha! The things my sisters have me do! Proof baby! RT @KhloeKardashian: Kim got a butt X-Ray… bit.ly/ldeCQZ See, it’s REAL!!! LOL.”

The X-Ray looks fake if she expects people to believe it is really perhaps she should not had her waste look so small LOL.  She is a total waste of space, next…..Meanwhile Kim is said to be working out in the gym twice a day to lose some weight for her wedding day and her current victim Kris Humphries.