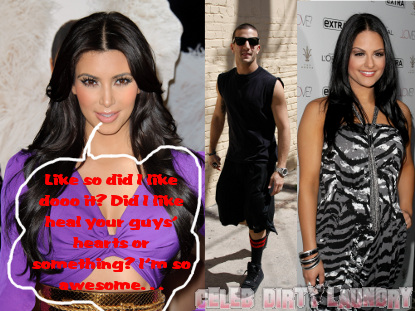 Kim Kardashian had a party recently with some of her closest pals and decided (if not consciously, then sub-consciously) that she might try to re-ignite the flame between Pia Toscano and DWTS’s Mark Ballas by inviting them both.

Kim tweeted the morning after the party saying everyone had a “lovely” time together. No one is 100% positive as to whether or not her oh-crap-I-accidentally-but-really-meant-to-invite-you-both-to-the-same-party action was effective in reuniting the couple, but I think many people wouldn’t mind seeing those two get back together.

I know I would  enjoy seeing them together . . . only because I could then start calling them Ballascano — and that, my friends, sounds like one bad-ass, borderline mafia-esque couple.

(If you don’t know who Pia Toscano is, she’s that girl from American Idol who always wore those jumpsuit looking outfits. I don’t know what they are called, mainly because I’ve never worn one. See the above picture. If you know what to call those outlandish space suit looking things, let me know in the comment section below.)

So, what do you think? Are they back together?