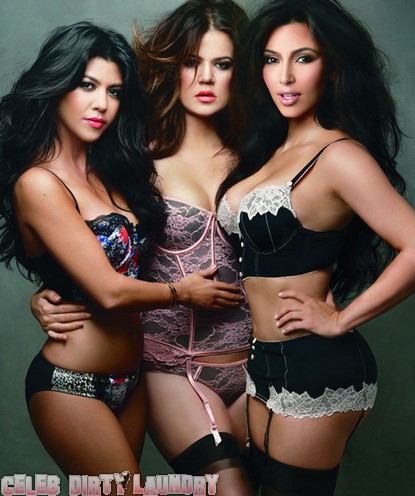 Was this ad for the Kardashian Kollection Photoshopped in the dark?!? That’s what millions of readers (okay, maybe it’s just me) want to know!

Kim, Khloe and Kourtney Kardashian stripped down for famed photographer, Annie Leibovitz to create this monstrosity. Now, we’re sure that when this photograph left Annie’s office, it didn’t look anything near what this creation is. The question is, who did this awful Photoshop work and why aren’t they fired?!?

Firstly, the only one who actually looks normal is Kourtney. Secondly, they must’ve stood Kim on a stool so that she can appear to be the same height as Kim. Thirdly, Khloe looks like a constipated Wookie (apologies to Wookie’s everywhere). Fourthly, what on Earth happened to Kim’s face? Not only does she look like she’s from a different heritage completely, but her face doesn’t even match the color of her body at all. Her chin looks like it’s been carved off and her head bolted back on to someone else’s body.

Does seeing these three famewhores is nearly nothing make you want to run out and buy what they’re peddling? We’re curious.

Also, if Julia Roberts’ ads can get banned in the U.K., then why can’t we do the same thing? This most definitely would promote an unhealthy body image, don’t you think? Especially when you know for a fact that Kim’s butt is larger than that in real life.