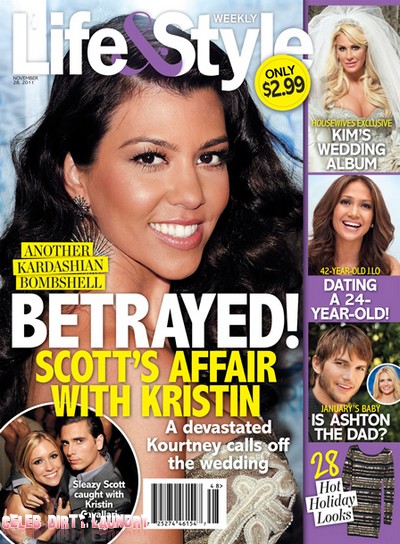 The current issue of Life & Style Magazine features the cover story ‘Kourney Kardashian betrayed by Scott Disick.’  In a bombshell claim and an exclusive story the magazine claims that there is another Kardashian bombshell. The first one of course being Kim Kardashian filing for divorce from her husband after just 72 days.  Now apparently Scott Disick was caught cheating on Kourtney Kardashian with Kristin Cavallari.  Kourney is so devastated she has called off the wedding to Scott Disick

Life & Style has more: “While Kourtney and Scott were on a break, Scott hooked up with Kristin,” a friend reveals to Life & Style.  So when both Rob and Kristin were confirmed as contestants on DWTS, “Scott and Kourtney argued about Kristin,” a friend confirms. “Kourtney can’t stand her now and didn’t want Scott at show tapings.”  A Kardashian pal confirms that “Scott and Kristin hooked up in Las Vegas during a time [February 2009] that he was on a break from Kourtney.” The Kardashian pal adds that Kristin, Kourtney and Scott were best friends with Kristin during her Laguna Beach days and even after Kristin stopped dating Kourtney’s stepbrother Brody Jenner.

Sources further report that all was not perfect with Kourtney and Scott for a while and when the two would take breaks he would head over to Kristen to mend his heart and party hardy with her.  The magazine also claims that the situation has gotten so bad that Scott has moved out.  Yikes!

For more details, pick up the current issue of the magazine which is on stands now!