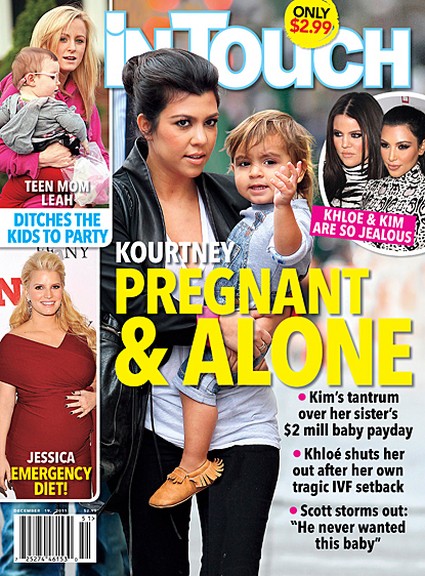 The current issue of In Touch has the cover story ‘Kourtney Pregnant and Alone.’  The magazine claims that Kim Kardashian is having tantrums over Kourtney Kardashian’s $2 million baby payday.  No surprise here after Kim’s marriage fiasco she must be uber jealous of Kourtney.  Khloe Kardashain on the other hand has been desperate to conceive and now Kourtney ends up pregnant for second time she cannot be happy.   Because of the second pregnancy Khloe has shut her out after her tragic in-vitro treatments have had a setback.  As Celeb Dirty Laundry reported earlier today Khloe and her husband Lamar Odom have decided to undergo in-vitro  to conceive.

In Touch has the scoop: They’re expecting their second baby together, but as Kourtney Kardashian wandered through Beverly Hills’ Nieman Marcus with her boyfriend, Scott Disick, she looked as though she was completely alone in the world. With Scott walking near her but not saying a word, the nine-weeks-pregnant reality star continuously checked her phone, looking sad and lost, as if she’d rather be anywhere else. As unfair as it may seem, the mom-to-be has found she has no one to share her happiness with — not Scott, and especially not her two sisters, both of whom have turned away from her out of pure jealousy.

Not only are both are sisters jealous, but her she has been having problems with her boyfriend Scott Disick.   The two have reportidly split up in the past and now the magazine claims that Scott has walked out again.  Apparently Scott never wanted a second baby.  Poor Kourtney does not seem things are going well for her. We recently caught up with Kourtney having a casual day alone at the gym.

Also included in this week’s issue the magazine claims that Jessica Simpson who is pregnant is getting too fat and they have her on an emergency diet.  To find out all this and more pick up the current issue of In Touch!