Kristen Stewart Back On ‘Snow White and the Huntsman Set’ – New Pictures! 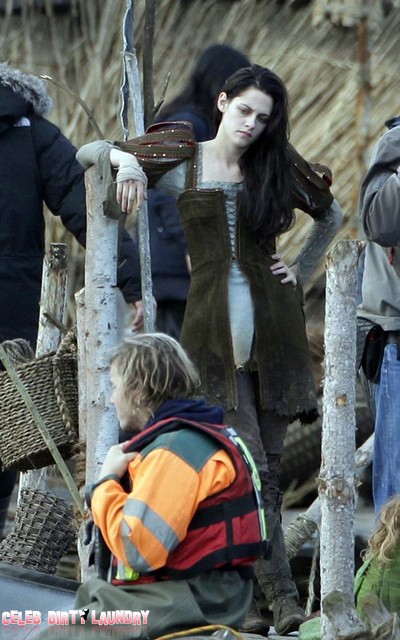 Kristen Stewart hasn’t been promoting Twilight: Breaking Dawn Part 1 like her other co-stars, and my bet it’s because she’s busy filming Snow White and the Huntsman in Surrey, UK.

More pictures have surfaced of the young actress on set, with Kristen looking very serious while taking direction from director Rupert Sanders.

Have no fear Twi-Hards; KStew is only putting in a few days work before she returns to the U.S for the premiere of Breaking Dawn.

Kristen revealed to MTV that she’d be happy starring in more Snow White films, even if it’s another franchise like that little vampire movie she’s in.

“Oh man, to be totally candid and honest with you, when I first signed on to this thing, the idea of doing another franchise was like, ‘Wow, we’ll cross that bridge when it comes to it.’ It was so far outside my realm of thinking. I was so focused on the first one, and I thought, ‘Maybe, maybe,’ but I’ve got star in my eyes. I’m literally over the moon, about what I’m doing right now. I would love to do more ‘Snow White’ films.”

I’m stoked to see the different approach to this storyline, and I hope Kristen nails the role as I think she’s a good actress (not just because she’s dating my boyfriend RPattz) and I do like me a good franchise!

Click on the thumbnails to enlarge…..Enjoy the pictures below!