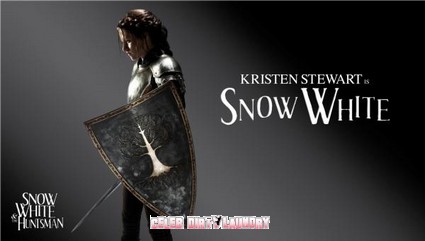 First look at Kristen Stewart, Charlize Theron, Chris Hemsworth and Sam Claflin in Snow White and the Huntsman debuted at Comic-Con.  The movie is a twist to the fairy tale, the Huntsman (Hemsworth) is ordered to take Snow White (Stewart) into the woods to be killed winds up becoming her protector and mentor in a quest to vanquish the Evil Queen (Theron).

The first thing that you notice about the promo pics is Snow White (Kristen Stewart), she is not in the usual girly dress but is dressed more like Joan of Arc and seems ready to fight and fierce.  Kristen said the following about her character at Comic-Con: “This girl has the amazing ability to channel fear, things that people are typically afraid to do, into this really focused, really charged, driving energy.  She truly does not let her heart cloud her mind.  Also I get to have a sword and stuff, and really cool weapons.”

To find out more about the other characters head over to Entertainment Weekly.  How do you like the promo pics?  Let us know in the comments below!  The movie starts filming next week and is expected to hit theaters June 2012.