Kristen Stewart Gets In A Lil’ Fender Bender 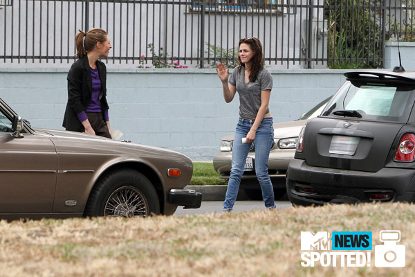 Woopsy! Kristen Stewart got in a little fender bender today in Hollywood. Thankfully, no one was hurt. And you know what? I bet whoever it is she ran in to wasn’t all that upset. She got to meet KStew!

Kristen Stewart supposedly exchanged information with the person and both were on their merry little ways. From pictures, it looks like KStew’s victim was a young lady not much older than herself.

This obviously isn’t a MAJOR story, but we just thought we’d give you a quick update on KStew’s life. Make sure that you watch out for the Twilight star if you’re driving anywhere on or near a major Hollywood road. You  never know when — BAM! — you could get KStew-ed!