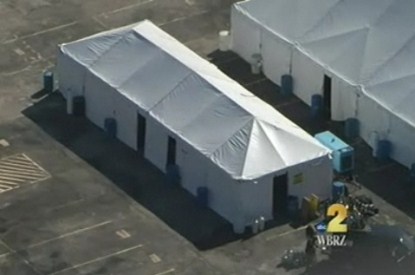 Arsenal Park located in Baton Rouge, Louisiana was closed over the weekend for the Twilight Saga: Breaking Dawn shooting.  Twihards everywhere were thinking that they were going to film the big fight scene however new information leads us to believe they may have actually filmed the wedding of Bella Swan (Kristen Stewart) and Edward Cullen (Robert Pattinson).

Michael Welch who plays Bella’s friend Mike Newton let the cat out of the bag.  He  tweeted on his twitter account: , “I’m off to Baton Rouge, Louisiana to work on a new film called Baking Nan.. wait, that’s not it- It’s called Raking Lawns.. No, hold on…”

What makes this interesting is the only scene in Breaking Dawn Michael appears is the wedding scene.  It is a possibility he was there filming promotional pics but highly unlikely considering the size of the green backdrop they are using (see pics below & video)  There is also a picture of a what appears to be a long aisle up to a green backdrop and this could be the aisle Bella and Edward walk up to get married.  Take a look at the pics and video.  One thing for sure we will all know when the movie hits theatres November 2011.