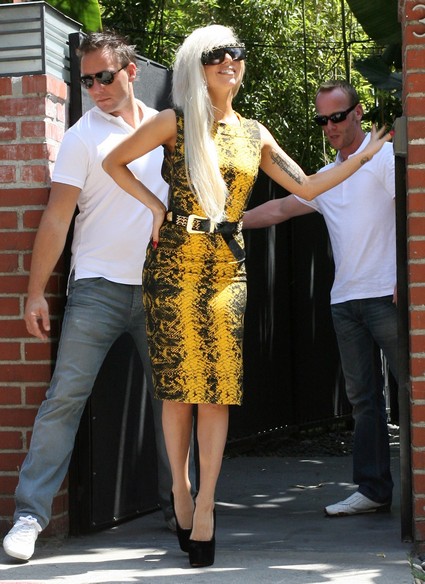 Lady Gaga has dedicated a song to a fan who committed suicide as she performed at the iHeartRadio festival.  Gaga was devastated when she heard the tragic story last week of 14-year-old Jamey Rodemeyer who killed himself because he was being bullied about his sexuality.

While on stage at the Las Vegas music event Gaga paid tribute to Jamey before performing her song ‘Hair’ as a video montage with his photo played in the background.

She told the crowd: “I lost a little monster this week and I’d like to dedicate this song to him. Tonight, Jamey, I know you’re up there and looking at us and you’re not a victim. Bullying is for losers. Put your hands up for Jamey!”

Gaga closed the two-day event – which also featured performances from Justin Timberlake, Jennifer Lopez, Coldplay and Jay-Z – and was joined by Sting for a duet of ‘Stand By Me.’

Introducing the musician, she said: “The police are here! Sting is one of my favourite people in the whole world because when I started in this business, I started to meet real legends but they’re not always very nice. Sting is one of the kindest, most loving people I’ve ever met.”

After hearing of Jamey’s death the ‘Born This Way’ singer vowed to meet with President Barack Obama to ask him to create legislation which makes bullying at any age a crime.

In a series of tweets, she wrote: “The past days I’ve spent reflecting, crying, and yelling. I have so much anger. It is hard to feel love when cruelty takes someones life.”  “Jamey Rodemeyer, 14 yrs old, took his life because of bullying.   Bullying must become be illegal. It is a hate crime.”

We can’t argue with Gaga about that.

“I am meeting with our President. I will not stop fighting. This must end. Our generation has the power to end it. Trend it #MakeALawForJamey (sic)”

Before committing suicide Jamey posted the prophetic line “don’t forget me when I come crying to heaven’s door” from Gaga’s song ‘The Queen’ on his Facebook page followed by a tribute to the pop superstar.

It’s good to see Lady Gaga doing her best to fight against the age old problem of man’s inhumanity to man. To see her have any success requires that we all do our part. Bullying takes place all around us and amongst us everyday. It’s great to have a huge star like Gaga working to make bullying unacceptable but if we don’t do our part her efforts will be in vain.