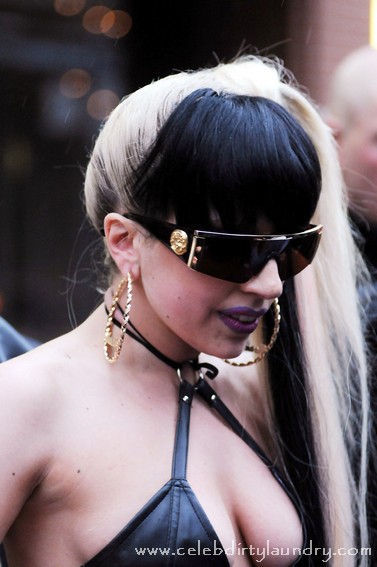 Lady GaGa, 24, departs her hotel during a photo shoot in Toronto, Canada March 4th, 2011.   GaGa was wearing a leather bra and stockings showing her leopard print underwear underneath.  She also accessorised with big sunglasses, huge hoop gold earings and bright pink lipstick with purple lip liner.  Ignoring the chilly 38 degree rainy weather in Toronto  GaGa carried her coat rather than put it on and get warm.  I guess she believes it is better to be fashionable and shock people  than  be warm.  GaGa stepped out in the rain, ignored the cold and signed autographs for her fans.

Once GaGa was finished greeting her fans she headed off to her next concert in Buffalo.  As we reported last night during her concert she brought on stage one of her Canadian fans 10-year-old YouTube sensation Maria Aragon.  GaGa brought the Winnipeg girl onstage at the Air Canada Canter to wild cheering from the audience.  They sat down together and performed  Born This Way.