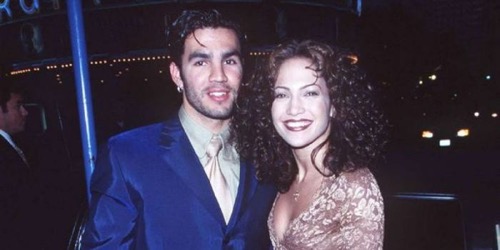 A video of Jennifer Lopez with her ex-husband Ojani Noa has been released from their honeymoon.  Actually, it is just a small portion.  The rest of the footage is locked in a safety deposit box at the City National Bank in Century City, California.    The tapes are about 15-20 minutes all the different clips among the 27 hours of footage of Ojani and Jennifer — who divorced after less than a year of marriage in 1998.

Ojani was hoping to have released the footage for a tidy profit already but has been rebuffed by J-Lo at every turn.  The fight has been going back and forth and Jennifer is not giving up.  A Los Angeles County Superior Judge recently ruled that the video cannot be sold for distribution without Jennifer signing off on it.  So Jennifer has won the current round of which I am certain will be a long and messy fight.

Clearly, the tapes are also causing for contention between Jennifer and her hubby Marc Anthony.  He recently stormed out of an interview with a Univision TV reporter after she refused to stop quizzing him about his wife, Jennifer Lopez’s, ongoing legal battle with her ex-husband Ojani Noa.