Levi Johnston And Bristol Palin: Battle Of The Books 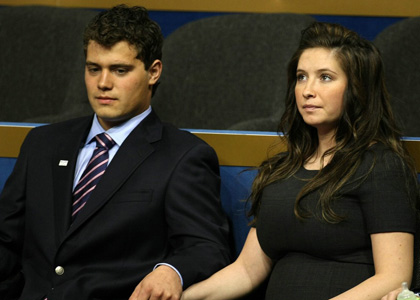 Take two barely literate dullards like Bristol Palin and Levi Johnston and encourage them both to author autobiographical books to make a quick buck. That is what the publishing industry has done and the results of this Frankensteinian. experiment are Levi’s ‘Deer in the Headlights: My Life in Sarah Palin’s Crosshairs’ and Bristol’s ‘Not Afraid of Life: My Journey So Far.’

Needless to say a Sear’s catalogue makes better reading than either of these clunkers but there is one humorous aspect to the whole scam – Levi’s story of Bristol’s pregnancy!

According to young Levi Bristol Palin felt so slighted by Sarah Palin’s 2007 pregnancy that she wanted to one-up her famous mom by having a baby her own. Levi claims that jealous Bristol told him in March 2008, “Let’s get pregnant.”

Quite different than Bristol’s drunken date rape version of the events leading to her pregnancy with Tripp.

Levi says he had “been too dumb” to use a condom with Bristol even though he knew “what she wanted.”

Sarah Palin thought Bristol and Levi were playing a joke on her when they first told her about their pregnancy, according to Johnston in the book. After finding out they were serious Sarah suggested Bristol and Levi put the child up for adoption to “avoid a scandal.”

Tripp was born in December 2008, to Bristol, then 17. Bristol then went on to make a load of money talking about sexual abstinence on college campuses. Only in America… .