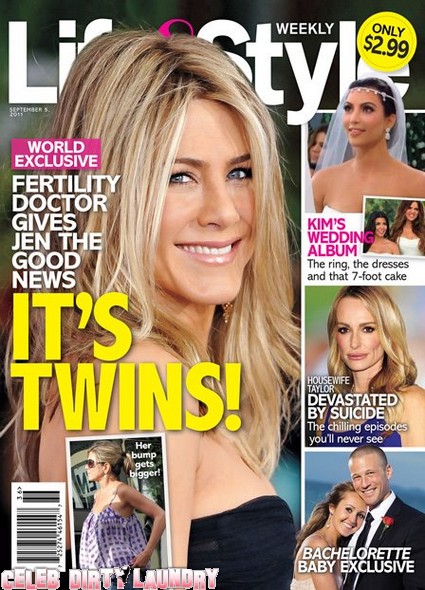 On the September 5th, 2011 cover of Life & Style Magazine they feature Jennifer Aniston, 42.  They claim they have a world exclusive and blazoned across the cover ‘Fertility Doctor Gives Jen The good News – It’s Twins, Her Bump gets bigger!’  If each time a magazine claimed Jennifer Aniston was pregnant or adopting was true the girl would have her own baseball team now.   Since Jennifer has found herself a new man Justin Theroux the usual rumors of her getting married have been circulating for weeks.  They have been dating since May 2011.  The next logical conclusion of course is that she is pregnant.

The magazine realizing that this is the 100th time she is suppose to be pregnant has decided not only is she pregnant but she is having twins.  The whole thing is probably news to Jennifer.  Meanwhile they managed to find an unflattering picture of Jennifer wearing a big top which they claim is proof her baby bump is getting bigger.  We are calling bulls*!t on the story and think it is just groundless speculation!  What do you think?  Is Jennifer pregnant with twins?

Meanwhile Jennifer recently gifted her new beau with an expensive gift.   She bought Justin  a $12,000 jacket previously owned by iconic movie star James Dean.   The jacket was worn by 50’s legend Dean throughout his best known role in Rebel Without a Cause.