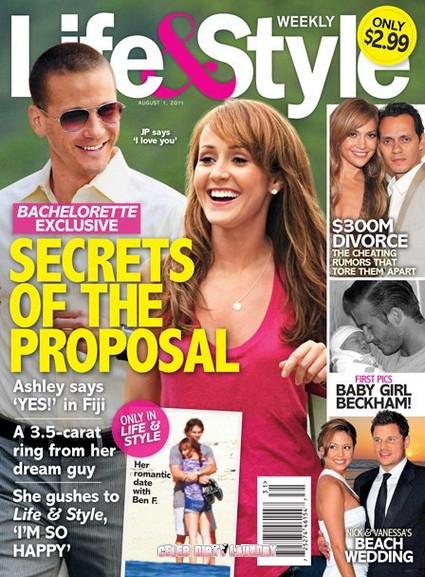 In The August 1st, 2011 issue of Life & Style magazine, it features a Bachelorette Ashley Hebert Exclusive.  They claim they have Secrets of the Proposal and blazoned across the cover:  “Ashley Says Yes In Fiji; A 3.5-carat from her dream guy and “She gushes, I’m So Happy”

In this issue: “As this season of Bachelorette nears an end, three men remain: JP, Ben F. and Constantine. But only one will win Ashley Hebert’s heart–and now, Life & Style can reveal exclusive details of that magical moment when the man of Ashley’s dreams proposed! Filmed on the secluded shore of Fiji at the VomVomo Island Resort, Ashley was wearing a long sequined pale-pink gown surrounded by tropical flowers, as the winner proposed with a stunning modern-style 3.5-carat Neil Lane diamond ring. With tears in her eyes, Ashley said yes!”

Three men JP, Ben F. and Constantine remain (or so Life & Style says) but  a SPOILER we posted earlier this week reveals Constantine self-eliminates  due to religious issues.  So there are actually only two men left.  It is down to JP and Ben F. to win Ashley’s heart.  Who do you think it will be?