Lindsay Lohan And Paris Hilton Offered $500,000 Each To Box 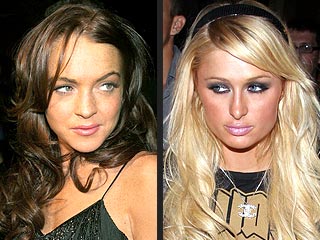 Damon Feldman of Hollywood Boxing Federation has offered Paris Hilton and Lindsay Lohan a total of a million dollars if they agree to duke it out in a charity event.

Feldman said: “We’re calling it the battle of the bad girls of Hollywood,” adding that the starlets would use “big pillow sized boxing gloves.”  Feldman continued: “This would be nothing more than a fun match-up, and Paris and Lindsay have both dabbled with boxing training in the past, Michael could even help train Lindsay as he is undefeated in Celebrity Boxing!”

Feldman has previously put on fights featuring ‘The Partridge Family’ star Danny Bonaduce and Lindsay’s father Michael said that Lindsay and Paris would only be required to fight three one-minute rounds and be paid $500,000 each.

Paris and Lindsay are on good terms these days – in images released last September, apparently taken at a sleazy Hollywood bash, Lohan was pictured snuggling up to Hilton before the pair shared a passionate kiss.

Feldman had previously made a pitch to Hollywood superstars Will Smith and Mark Wahlberg to enter the ring against each other.  Smith, who played Muhammad Ali in ‘Ali,’ rejected the offer.

One big question that arises is what percentage does Feldman actually fork over to charity in these celebrity boxing events?