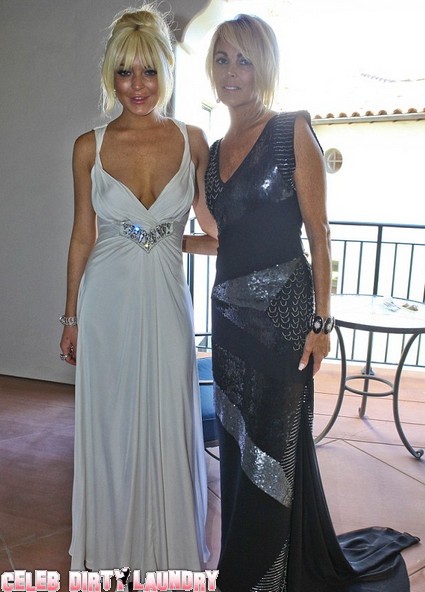 It was not against the law for Lindsay to be drinking – although she is still on probation Lindsay has no restrictions on drinking as long as she is not driving – and she was not driving. Of course Lindsay still has community service and counseling requirements to meet so she is not out of the woods yet.

Since the Lohans and Kardashians are family friends it was no surprise to see Lindsay and her sister Ali chaperoned (lol) by their mom, Dina, at the wedding – Lindsay was at Kim’s bridal shower several weeks back.

“She was drinking and partying hard,” an insider said. “I saw her order shots from the bar.”

Lindsay’s dad, Michael Lohan, told me during an exclusive interview that he considered his ex-wife Dina to be a big enabler for Lindsay – and this wedding party proves him right. She was sitting right with her daughters as Lindsay downed several drinks.

Is this what a mother should be doing with a daughter who has substance abuse problems? You tell us.