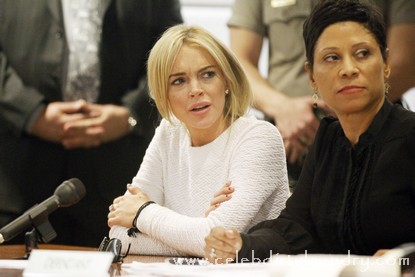 Lindsay Lohan will appear today before Judge Keith L. Schwartz, and sources connected with the case say that during the hearing prosecutor Danette Meyers will present Lindsay’s lawyer, Shawn Holley, with a formal offer to plea bargain the case.

The judge will be the middleman in plea negotiations today between Lindsay and the prosecutor  and sources connected with the case say that the judge thinks Lindsay should do time.

Sources say Meyers has already told Holley any deal will include significant jail time but Lindsay continues to refuse to accept a plea that involves time behind bars.

Sources connected with the case say Judge Schwartz will propose that Lindsay accept jail time for the probation violation and three years felony probation for the grand theft case.  If Lindsay gets in trouble during the probationary period, she’ll go to state prison.

We’re told Holley has not seen the surveillance video yet, but Meyers will present her with her very own CD tomorrow — before the hearing.

If Lindsay doesn’t accept a plea, the judge will set a date for a preliminary hearing.

Sources close to Lindsay say that as of early this morning, Lindsay insists she’s innocent and is ready to go to trial to clear her name.