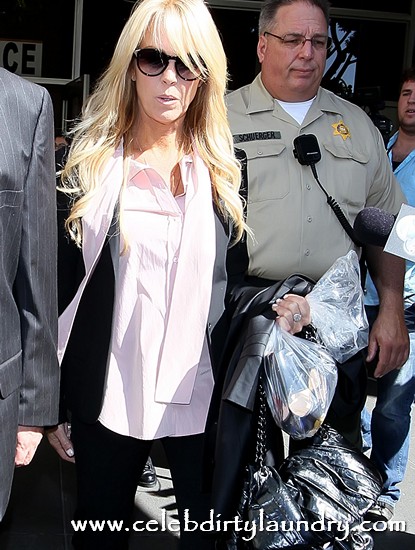 Lindsay Lohan’s mother Dina Lohan is having a regular canary at the owners of the California jewellery store that sold the surveillance footage (taken on Closed Circuit TV) which shows the actress trying on a necklace she is alleged to have stolen from the shop.

Lindsay is already irate at the bosses at Kamofie & Company for releasing the CCTV tapes to a media outlet in a deal worth a reported $40,000.
Lindsay argues that the jewellers are attempting to cash in on her name, and has threatened legal action claiming she never granted the store owners permission to use her image for profit.

Clips of the video have also emerged online at Necklacevideo.com – where viewers are offered a ‘free’ look at Lindsay and the necklace but before you get to the juicy part you asked to pay $2.99 to view more of the recording – beware of the RIP-OFF!

Lindsay’s mom, Dina, is furious about the release of the footage and she has branded the ‘pay-as-you-watch’ scheme “ridiculous”, telling the New York Daily News, “It’s clear what this is about.  It’s gotten to such a ridiculous point.  They need to leave Lindsay alone.”

Lindsay is set to stand trial over allegations she stole the necklace in January after rejecting a plea deal for the second time.   A preliminary hearing into the case will take place on 22 April (11), when a judge will decide if prosecutors have enough evidence for a trial and whether Lohan violated her probation stemming from a previous DUI charge.

Whatever Lindsay did or did not do – Kamofie and Company have no right to market this video of Lindsay.  If you go shopping (shoplifting?) somewhere and the store films the process that does not permit the store to sell the tape with you on it!