Have Maks & Hope Solo’s Clashes With DWTS Judges Cost Them Their Place in The Finals? 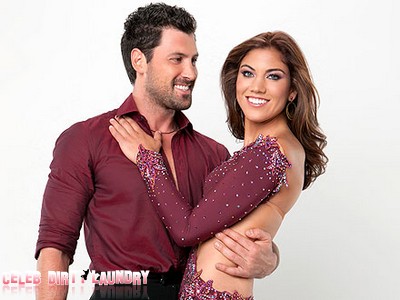 Last night on Dancing With The Stars Maksim Chmerkovskiy & Hope Solo once again had a problem with one of the judges.  Carrie Ann Inaba was giving her comments on Maks and Hope’s Argentine Tango performance and stopped mid-sentence to say “That’s fine Maks, you can go ahead and keep smiling.” Carrie Ann thought the smile Maks gave was sarcastic and decided to call him on it.  While the two were waiting for their scores Hope decided to jump to Maks defense and said, “Maks was smiling because we should be smiling.  So Carrie Ann, thank you, Maks was smiling. This is my partner. Finally, we’re happy!”    See Hope’s two performances HERE!

Maks tried to stop Hope and put his hand over her mouth, but the damage was done.  When Carrie Ann read their score you could tell by her voice she was upset and she scored them an 8.

This is not the first run in for the pair during the October 24th epsiode Maks was not happy with Len for his comments and told him, ‘perhaps it was time for him to retire.’  That’s when Carrie Ann snapped and told Maks to quit being disrespectful, but the damage had already been done.

Adding insult to injury Maks posted on his blog before lasted last night’s performance critisism of the fact the contestants were overburdened by being given three dances to perform. Maks wrote:

It’s a shock to not just the celebrities, but the pros too. At this stage of the game, we’re all exhausted. This is when our bodies start shutting down and we get sick, so to have three dances, it’s very, very tough. I know they want more content because they want a longer broadcast, but this is the last thing any of us needs. You would have a better show if it was shorter with few dances. It’s about quality, not quantity, right?

Sure Maks is right the judges definitely play favorites and they style their comments accordingly but lets face it, Hope’s dances have not always been the best.  One thing was clear last night from their placement, the judges have had enough of their attitude.  For the Cha Cha relay they were placed last.   They ended the evening at the bottom of the leaderboard  with total score of 49/70.  Take a look at their Cha Cha relay performance here do you think they deserved to be placed last?

One thing they can count on after all of this, I doubt Hope will be taking home the Mirror Ball trophy or even making it into the finals.  What do you think?  Sound out in the comments below!