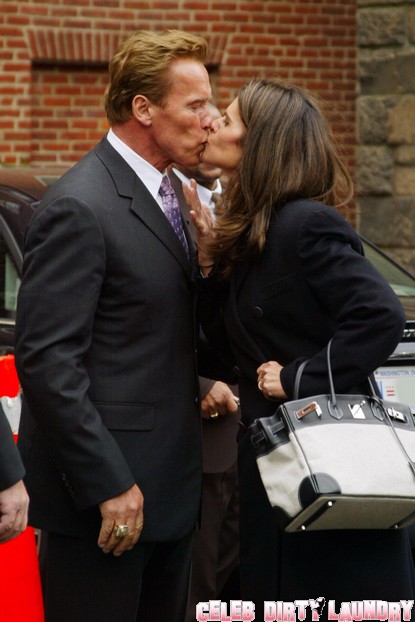 Arnold Schwarzenegger and Maria Shriver’s separation after 25 years of marriage was caused by Arnold’s infidelity and a child he fathered with their maid.

Schwarzenegger, 63, and Shriver, 55, actually split up earlier this year after his shocking admission to her – that the former California governor had fathered a child over ten years ago with a longtime member of the couple’s household staff; Shriver moved out of the family’s Brentwood, L.A. home, and the couple announced their separation last week.

“After leaving the governor’s office I told my wife about this event, which occurred over a decade ago,” Schwarzenegger told the LA Times Tuesday in a statement. “I understand and deserve the feelings of anger and disappointment among my friends and family. There are no excuses and I take full responsibility for the hurt I have caused. I have apologized to Maria, my children and my family. I am truly sorry.” I’ll bet he is REALLY sorry he didn’t wear a condom.

The names of the female staffer (who worked for the family for over 20 years before retiring in January) and her child with Schwarzenegger are being withheld. In a Monday interview before Schwarzenegger’s confession, the unidentified woman claimed that her child’s father was her then-husband; she declined to comment following the the ex-governor’s subsequent statement.

“I ask that the media respect my wife and children through this extremely difficult time, “Schwarzenegger concluded. “While I deserve your attention and criticism, my family does not.”

A source told the LA Times that Schwarzenegger has financially provided for his child throughout its life and continues to pay support.

Shriver’s rep declined to comment on the shocking statement. The former TV journalist (and a member of the powerful Kennedy clan) alluded to personal turmoil in a YouTube video back in March.