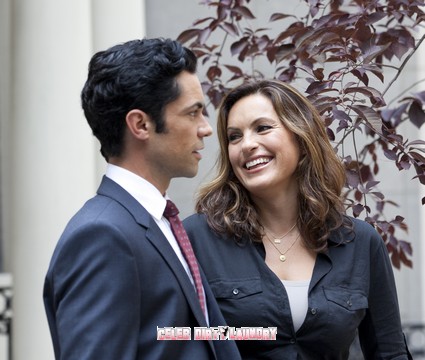 Pictured above Danny Pino and Mariska Hargitay on the set of ‘Law & Order: SVU’ shooting on location on the Upper East Side New York City, July 21st, 2011.  It was announced weeks ago that after twelve years of starring in the crime drama, actor Chris Meloni won’t be returning to the crime drama’s upcoming thirteenth season.   Also B.D Wong who played Dr. George Huang on Law & Order: SVU for the past eleven years has decided to leave the show.

Cold Case star Danny Pinto is one of the two actors who have signed on as a series regular.  The other actor is Chase star Kelli Giddish.  Executive Producer Dik Wolf said: “I’m very pleased that we have two amazing actors joining the cast. I know this combination will give us the opportunity to explore the world of SVU with new eyes.”

Law & Order: SVU is one of my favorite shows, but all my favorite characters are gone.  Mariska is still there, but her part will be seriously cut back.    What do you think can Law & Order: SVU survive without Elliot Stabler, Dr. George Huang and a semi regular Olivia Benson?  Let us know in the comments below!  Enjoy the pictures!

Click on the thumbnails below to enlarge 15 more pictures!