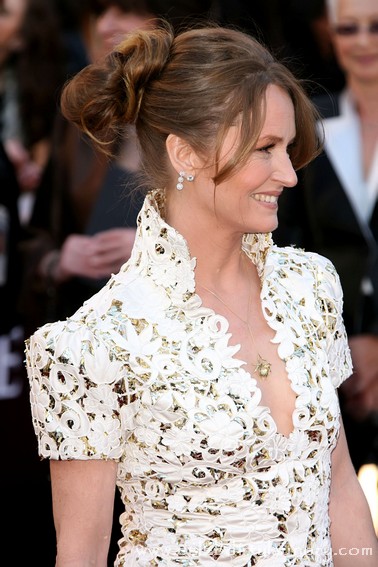 At the 83rd Annual Academy Awards tonight Melissa Leo won the award for Best Supporting Actress for her role as the control freak mom in  “The Fighter.”  This was the first acting award of the evening.  For her acceptance speech at one point she says “When you are not up here it looks so Fu!* easy.”  Funny thing is they missed bleeping it out so everyone got to hear her F-bomb!  In her defense she was clearly very surprised that she won the award.  She said to Kirk Douglas who presented the award to her “pinch me.”

Kirk Douglas was the presenter of the award and he made the nominees wait a long time to get the award as he took his time opening the envelope.  Kirk Douglas told  Melissa as he left the stage “You’re much more beautiful than you were in The Fighter.”

I was hoping 14 year old Hailee Steinfeld would win the award for her role in True Grit, but she is young and I am sure she will have plenty more opportunities to win.