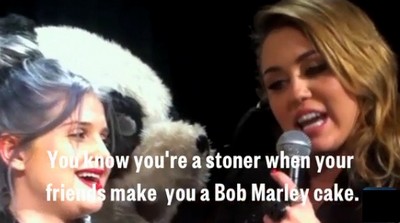 Miley Cyrus has come out and said that she is a ‘pothead’ admits that she smokes ‘way to much fu**in’ weed. Miley seems proud of this as she announced it for all to hear, and record, at her private 19th birthday party at the Roosevelt Hotel Beacher’s Madhouse Club in Los Angeles. We guess that birthday bash wasn’t as private as some might have thought!

In the video shown below (obtained by The Daily) Kelly Osbourne presents a cake to Cyrus emblazoned with the face of a ganja icon, and Miley remarks: “You know you’re a stoner when friends make you a Bob Marley cake – you know you smoke way too much f***in’ weed.”

“I thought salvia was your problem, man?” joked Kelly, in a reference to the infamous bong video that surfaced after Cyrus’ 18th birthday party last year, in which Miley was caught smoking what she later claimed was the legal herb, salvia.

Cyrus tried to mitigate the flak from last year’ bong scandal by saying that it was salvia she was smoking – not that anybody really believed her – but with her statement at her birthday party last week she has pretty well left no doubt that she is a major pothead.

Miley’s mother, Tish, and father, Billy Ray Cyrus, were in attendance at the birthday bash but a stoner apparently has no shame – either that of her parent’s already knew that she loves and smokes weed. In any case, one thing is absolutely clear – Hannah Montana has grown up – and morphed into a pothead. Yikes!

How do you feel about Miley Cyrus being a stoner? Let us know is in the comments below.