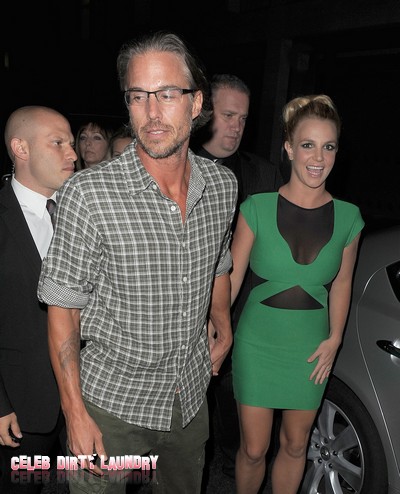 All that stands between Britney Spears and formal engagement to her long-term boyfriend, Jason Trawick, is an engagement ring – since he is ready and willing to propose to her later this year.

Trawick has been dating Britney for around two years with the permission and encouragement of her dad and management team. Don’t forget that Britney is in fact still under a legal conservatorship which makes her little more than child in the eyes of the law.

Reports are that Trawick has been at several expensive celebrity jewellery shops looking for the perfect band for the temperamental hitmaker, and that he is “very close” to making his final choice.

An insider told website RadarOnline.com: “He has been everywhere from Tiffany to Harry Winston looking for a ring and he is close to making his final decision.  Don’t expect anything too massive or obnoxious. This ring will be classy and under 4-carats.”

The 39-year-old agent is expected to pop the question by the end of the year when he whisks the 29-year-old robotic Britney away on holiday at the end of her ‘Femme Fatale Tour’, which concludes in Puerto Rico on December 10.

A Spears family insider recently explained: “Britney and Jason discuss marriage all the time. Britney is truly in love with Jason, and well, Jason has loved her for a very, very long time.”

“Jason adores her two sons, Sean Preston and Jayden James. Jason is planning on taking Britney on a secluded getaway once the tour wraps, and it’s very likely he will pop the question at that time.”

If Britney ties the knot again it will be her third marriage after her wedding to childhood friend Jason Alexander in 2004, which lasted just 55 hours, and later that year she married dancer Kevin Federline, the father of her two boys, which lasted three years until their divorce in 2007.

We think Trawick has made some sort of deal with Britney’s dad, Jamie Spears, to keep her performing and off the illegal drugs and booze, in exchange for some massive compensation.