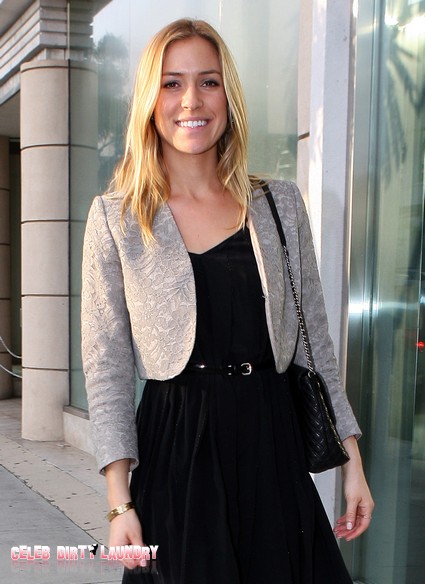 Looks like the engagement is back on for “Dancing with the Stars” castoff Kristin Cavallari and NFL quarterback Jay Cutler. The couple–who split in July after being engaged for just three months—have confirmed that they are engaged again.

The 28 year old Chicago bears quarterback notoriously dumped the 24 year old reality star a week after their July engagement party and just days after Cavallari posed for a Wedding dress pictorial in Life & Style Magazine. The couple got engaged in April after just ten months of dating.  Sources say that Cutler originally broke off the engagement because of Cavallari’s hard-partying ways but has recently come to accept that going out is part of her career.

Rumours that the couple had reconciled have been circulating ever since Cutler was spotted cheering for Cavallari during her stint on “Dancing,” but so far the pair has been mum about the status of their relationship. Cavallari took to twitter on November 21st to deny the news saying: “New week new rumor. I’m not engaged u guys.”

Maybe seeing his ex-fiancé on the arm on Lance Cpl. Jonathan Burkett at the Marine Corps Ball last month gave Cutler a change of heart because the former “Hills” star was spotted wearing the 5.2 carat engagement ring on a night out in Beverly Hills on Tuesday. Cavallari finally confirmed that the rumours were true on Wednesday saying: “This time its official…Jay and I are engaged again”

Cutler went on ESPN’s Waddle and Silvy radio show on the same day, and commented that the engagement was back on. The football star also discussed his hands off approach to wedding planning, saying: “you guys know as well as I do, I don’t make a lot of those decisions. I’m just kind of along for the ride. I hear of them in passing, or if I have to possibly write a check. Other than that, whatever she wants to do, I’m on board.”

The couple was originally planning on 2012 nuptials.  No news yet on when the new date is set for.