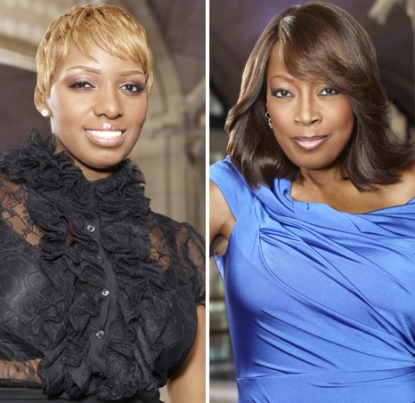 Displaying the total lack of grace or good manners we have come to expect from many celebrities ‘Real Housewives Of Atlanta’ star NeNe Leakes and former ‘View’ panelist Star Jones actually came to physical blows on the set of NBC’s Celebrity Apprentice.

“Star pointed her finger right in NeNe’s face and she slapped her hands away and rushed towards her,” a production source revealed.  “People had to intervene to separate them before things got totally out of hand.”

Until now, it was not known the volatile pair’s feud had spilled over into actual physical contact.  A recent TV appearance by NeNe, who appeared on the Wendy Williams Show confirmed both NeNe’s feud with Star and her trashy character as she said: “Star is special… I wouldn’t spit on her if she were on fire.”

The clash is poised to make the new season of NBC’s Celebrity Apprentice one to watch as its contestants take shots at one another both on and off the TV screen.  “Their feuding will no doubt be good for the ratings but these two women really despise one another now.”  When filming began in New York, the pair initially got along well.

But NeNe felt slighted by Star because she was not supportive when the cameras started to roll.  She thought that Star looked-down on her and tried to boss all the other contestants around as well; to make matters worse, she felt that Star was way too demanding when it came to hair, make-up and wardrobe.

The source said: “At first NeNe thought they would get along well because she watched Star’s dog and even went out on a double date with her.”
“But the friendship did not materialize and when filming actually started, things went from bad to worse – now NeNe doesn’t care who or what she says about Star Jones.”

I don’t trust most celebrity feuds that occur conveniently to boost ratings – when you look at the economics it is hard to trust the legitimacy of the dispute.