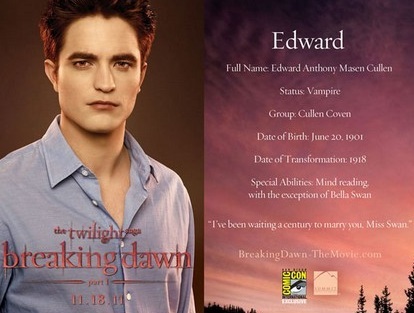 New Twilight Saga ‘Breaking Dawn’ Robert Pattinson & Kristen Stewart character cards will be released at Comic-Con.  The cards were made for San Diego Comic-Con and Twi-hards will be given one of these incredible looking cards of their favorite characters.  We have the two cards for you and not only do they feature Edward Cullen and Bella Swan but the cards give you some interesting facts about the couple. i.e. Full name, Birthday, Special Abilities etc.

The Breaking Dawn panel at Comic-Con will be talking place tomorrow and fans have already started camping out for it in hopes of seeing their favorite characters.   Robert Pattinson, Kristen Stewart and Taylor Lautner are expected to attend.  The Comic Con session will include exclusive footage from ‘The Twilight Saga: Breaking Dawn Part 1? and along with a filmmaker and cast Q&A session.

What do you think of the character cards?  Will you be attending Comic-Con let us know in the comments below! 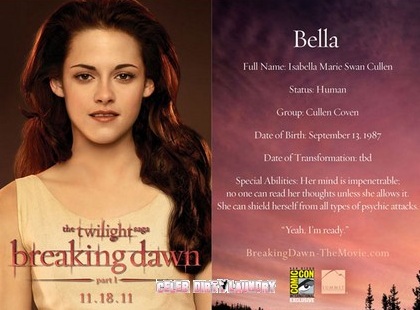