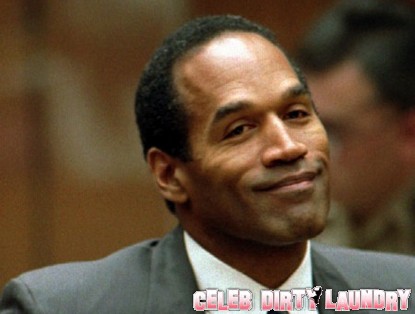 O.J. Simpson might have given Oprah Winfrey the interview of a lifetime, in confessing that he committed the murders of Nicole Brown and Ron Goldman, back in the nineties.

O.J. was acquitted of the crimes, but now apparently he wants to get the crimes off of his conscious and is confessing to murdering both Nicole and Ron, but he says it was in self defense.

He reportedly told an Oprah producer that he killed the two in self defense. A soyurce said, “Oprah has been in touch with O.J. for the past year. She contacted him in prison to explore the possibility that he might give her an interview. He has always been a big fan of hers, but for a long time he was reluctant to say he did the crime or give details of how it happened.”

The insider said, “He told the producer, ‘Tell Oprah that yes, I did it. I killed Nicole, but it was in self-defense. She pulled a knife on me and I had to defend myself.'”

He interrupted a meal she was having with their kids at a restaurant. The source said, “O.J. said he went home and kept getting angrier and angrier and worked himself into an absolute rage.”

He went on to say that he didn’t like how she treated him in front of the kids and the fact that she was having sex with other men at her condo with the kids there. He was quoted to have said, “I went over there to give her a piece of my mind.”

He revealed that he pounded on the door and the door swung open and there was Nicole standing there with a kitchen knife. He claims that she was yelling at him to go away and waving the knife in front of him. She allegedly slashed the knife in the air. He said, “I was in such a rage that something just snapped. I couldn’t take her constant taunting of me with other men or her using drugs and drinking while my kids were living with her. I went berserk. Before I knew what I was doing I took the knife away from Nicole and started slashing at her. I cut her over and over again until she was lifeless. I was shocked at my own anger – I had killed the woman I had loved for so long.”

He reportedly also dictated how he killed Ron Goldman. Ron was said to have came over to Nicole’s house and attacked O.J. when he saw her lifeless body on the floor. O.J. is also said to be claiming that the killing was also in self defense.

Are you buying it?

I wanna see the interview, but I don’t believe a word of it. Do you?