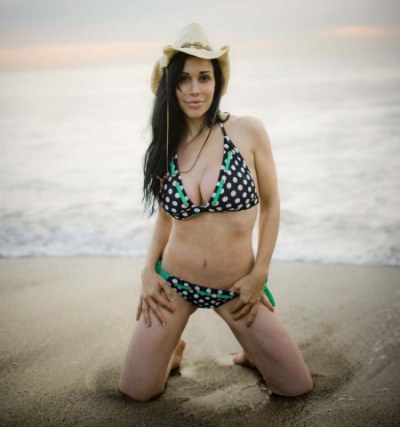 I think I’m going to scratch out my eyes with a fork after having done a Google image search for “Octomom sexy” for the above photo for you. But that’s the price you pay when you care about your readership, so you’re welcome.

According to reports, Nadya Suleman has recorded a fetish video! Ugh, this woman…I just can’t. In the video, she’s said to be whipping a grown man wearing a baby diaper and a bonnet. She had the video shot in her Los Angeles home.

The video shows Nadya Suleman, dressed in a black corset, black leggings and her body is kinda smokin’. Octo whips the dude in the diaper, so much so he has welts on his back. The video is being shopped for sale. We’re told both Nadya and the dude have signed the model release so it can be sold.

Does anyone really fantasize about wearing a diaper and bonnet and getting spanked by some chick who crapped out 14 kids? That boggles the mind.