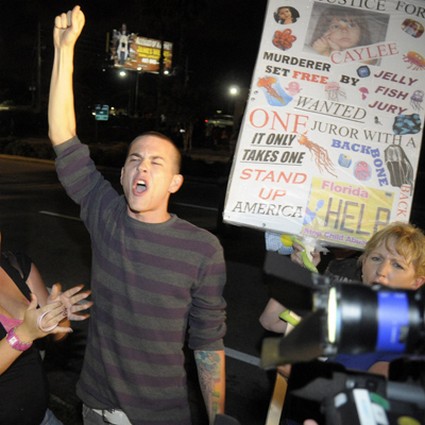 As everyone knows Casey Anthony who was accused of murdering her daughter Caylee Anthony was released from jail this morning.  As she left the jail hundreds of protesters had gathered.  Many believe Casey did indeed kill her daughter.  Rumor has it that Casey boarded a jet in Florida and headed to Columbus, OH.  If Casey is looking for anyone to protect her against the angry mobs of people she is going to have to pay for it.

TMZ has the scoop, “According to the Columbus PD  they have a Special Duty program, which allows people in their fine city to hire off duty cops for protection, and that’s what Casey would have to do if she wants someone to guard her from the angry mob.  However, if there is a specific, real threat … the PD would treat her the way they would anyone else and provide appropriate protection, without cost.”

No confirmation yet on if she actually went to Ohio but no matter where she goes the procedure is the same.  If there is no threat, no protection without $$$$ From all the public outcry it would seem Casey is going to need protection for a very long time.  She is currently one of the most hated women in America.  I don’t feel bad for her at all if she needs to pay.  I can just imagine the money she is going to make doing the talk show circuit and books.  A sad day today, there certainly is no justice for poor Caylee Anthony!