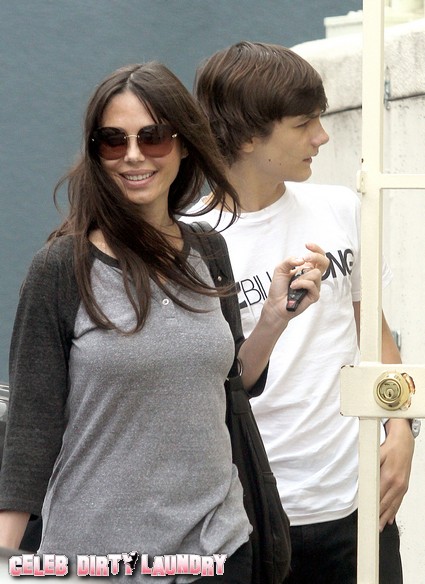 On Friday Oksana Grigorieva was up to her old tricks as she met a family law judge and a mediator separately from Mel Gibson to discuss custody of Lucia and also money. Included in Oksana’s massive demand was $500,000 for her son with Timothy Dalton, Sasha, who she says Mel traumatized Sasha during his attacks upon her.

Oksana claims Mel traumatized the boy during the January 6, 2009 explosive fight, which ended with physical violence. Oksana has alleged Mel knocked out two of her teeth, while Mel says he merely slapped her because she was out of control and endangering the baby.

Oksana claims Mel was abusive to the Sasha during the argument, calling him names and scaring him so much he allegedly hid under the bed. Oksana also claimed on another occasion that Mel threw her son onto a table, but Mel’s camp has denied it.
Naturally the reports are that Mel and Oksana are far apart on all matters as mediation is set to continue this week.

Oksana Grigorieva never seems to tire of trying to make Mel Gibson look like a monster while she attempts to get oodles of his money. Of course in her little brain she must see a relationship that goes something like this: ‘if I make Mel look really bad I will get his money.’