BY Annemarie LeBlanc on November 6, 2011 | Comments: 3 comments
Related : Once Upon A Time, Recap, TV 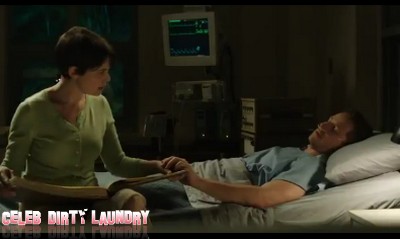 Tonight is the third episode of Once Upon A Time and it called ‘Snow Falls.’  Stay tuned as we cover the show with up-to-the-minute details.  On last week’s episode Regina (Evil Queen) tries to force Emma out of Storybrooke and out of her and Henry’s lives permanently but does not succeed. Meanwhile, it is revealed how the Evil Queen released the curse upon the fairytale world and it is surprising.  Rumpelstiltskin shows up to see Regina and she realizes he remembers everything, even her promise to him.  If you missed last week’s episode you can read our official recap here!

On this week’s episode we got to see a sneak peek spoiler clip and it looks like John Doe may be remembering he’s Prince Charming.   As Mary Margaret (Snow White) reads to John Doe a coma patient a story from the fairy tale book he touches her hand and she is amazed at the outcome.  After telling Emma and Henry about what happened Henry realizes that John Doe is remembering.

Official synopsis: At Henry’s urging, Emma convinces Mary Margaret to pay a visit to a comatose John Doe in the hospital and to read to him from the storybook. But Mary Margaret is stunned at the outcome of her visit. Meanwhile, back in the fairytale world, Prince Charming meets Snow White for the first time in a most unexpected way, on “Once Upon a Time.”In new window

The show opens in the forest a horse drawn carriage with Prince Charming and his Fiancé are driving. The carriage is stopped and Prince Charming gets out there is a fallen tree. He realizes that the tree has not fallen it has been cut and it is an ambush. The prince heads on horseback after the ambusher and catches him. Or so we thought it was a him but the Prince finds out it is a girl. It is Snow White and she hits a rock into the prince’s head and he tells her where ever she is he will find her. We now know how Prince Charming meets Snow White.

Margaret Mary is having dinner with and she is telling her dinner companion she wants kids and a marriage – love, the whole thing. She tells the man she is with she realizes it is inappropriate to talk about on the first date and leaves.

Emma meets with Margaret Mary and tells her that Henry wants her to read the fairy tale to John Doe the coma patient. Margaret Mary realizes that since Henry think she is Snow White then Henry also has to think John Doe is her husband, Prince Charming.

Margaret Mary goes to the hospital and reads to John Doe.  To Margaret Mary’s surprise John Doe takes her hand.

Margaret Mary gets the doctor and tells him that John Doe is waking up. The doctor checks and tells her that all is steady and he does not see anything. He suspects she may have fallen asleep and imagined the hand clasp. The Doctor tells Margaret Mary to go home and if anything changes he will call her.

Margaret Mary leaves and the doctor call Regina and tells her that there has been a change in John Doe – he grabbed a volunteer. Regina is shocked and worried when she learns it was Margaret!.

Back to the fairy tale, Snow White is taking her spoils out from hijacked Prince Charming’s coach. She walks out of her hideout and it is a trap – she is hoisted up in a tree snare. Prince Charming has found her, Snow White asks if that is the only way he can catch a women. He tells her, he will release her when she returns the pouch of jewels she stole from him.

Prince Charming tells her the jewelry is special, there is a ring that his mother gave him and he wanted to give it to his fiancee. Snow White tells him there is no such thing as true love and that his fiancee is hag. Prince Charming threatens to give her to the Queen who is looking for her as a wanted criminal – unless Snow White returns the jewels. Snow agrees.

Emma is at the restaurant with Henry and Margaret Mary walks in. She tells them that John Doe woke up and grabbed her hand. She tells them that the doctor said she was crazy. Henry tells Margaret Mary she has to go back and feels somehow, someway she touched him – she has to rad to him some more. They get to the hospital and the sheriff is there – John Doe is missing and Regina is there in his room.

Regina tells the sheriff to find John Doe. The sheriff quizzes the employees to find out what they saw. Emma looks at the video tape and realizes that they are looking at the wrong one. Margaret Mary looks and finds the right tape they put it in and see John Doe walking out towards the woods.

The sheriff, Emma and Margaret Mary are searching in the woods for John Doe. The sheriff tells them the trail has run cold. Margaret Mary asks Emma about her job of finding people. She asks her if her search for her parents made her take the job. Henry comes and tells Margaret Mary he knows where John Doe is and what he is doing. He says “He is looking for you.”

Back to the fairy tale, the huntsmen are about to cut Snow White’s heart out and the Prince intervenes as he is fighting one of the huntsmen another one grabs Snow and carries her off on horseback. Prince Charming takes his bow and arrow and shoots the huntsman who has Snow White and she is rescued. Snow White is grateful because Prince Charming has saved her. He asks her for his jewels, she tells him the trolls she sold them to are beyond the ridge and warns him about them.

Back to present time Henry keeps insisting that John Doe is looking for Margaret Mary. He tells Margaret Mary to stay still – that John Doe will find her. The sheriff calls for them and John Doe’s medical band is on a branch with fresh blood on it.

Back to the Fairytale Snow White and Prince Charming in the forest come to a sinister looking bridge. Snow White scares the horse away and tells Prince Charming that trolls don’t like horses. She tells the Prince to follow her and she puts gold coins on the rail of the bridge to lure the trolls. Up the side of the bridge crawls a creepy looking troll and then more trolls come on the bridge. They are horrid and evil. She tells the trolls that she wants to buy back one of the jewels she sold to them. She tells them that they can keep all she just wants the ring and she will give them back all their money. They keep asking who it is with her and they suspect it is a royal and it is a setup. They grab the Prince and search him and find her necklace with the fairy dust and the poster that says Snow White is wanted for a reward. They are excited, but Prince Charming picks up his sword and fights the trolls. Snow White gets her necklace back she runs and tells the Prince to follow her but when she turns around the trolls have the prince and are about to decapitate him. She takes her fairy dust and throws it at the trolls and turns them into beetles and saves the Prince. He is surprised that he saved her and used all her fairy dust and she tells him it was the honorable thing to do. She asks him how could she let Prince Charming die and he tells her he has a name and it is James. She says she will find another way to defeat her enemy the evil queen.

They leave the bridge together.

They get John Doe to the hospital to see the evil doctor. A women runs into the room and is crying and claiming him.  Regina shows up and tells Henry, Emma and Margaret May it is John Doe’s wife Katherine Nolan.
Prince Charming and Snow White continue to walk in the forest and he gives her back the gold and she gives him the ring so he can get married. Prince Charming tells Snow White the ring, it is not her style, and she takes the ring and put’s on and says he is right. She takes it off and gives it back to the Prince and tells him she is sure his fiancé will love it. He wishes her well and bids her goodbye.

Back to present time and Regina is telling everyone that John Doe is actually named David and the women who came in is his wife Katherine – who has supposedly been in the town all this time without knowing ‘David’ was in hospital, hmmm. Regina tells Henry he is grounded. Margaret Mary asks Katherine how she could not know her husband was in a hospital in a coma. She explains they had a fight and she told him to leave and she feels this is there second chanch.

The doctor comes out and tells them that physically he is fine but his memory is gone. Katherine asks to see him. Regina tells Henry he has to leave, he tells her he forgot his backpack and he whispers to Margaret Mary that she should not believe them, that John Doe was looking for her because they belong together.

Emma runs after the Mayor, she tells her she believes Katherine Nolan’s story is a load of crap. She tells Regina she believes it is strange that she was his emergency contact and she only just now found his wife. Regina tells Emma that once they found the tapes they found out he was talking in his sleep for Katherine. She tells Emma she has realized how grateful she is to have Henry. Then her parting shot is “not having someone is the worst curse to have.”

Margaret Mary watches John Doe hug his wife and she is visibly upset. She leaves the hospital. and returns home in an achy breaky heart mood.

Emma comes over to Margaret Mary’s apartment and asks her if her spare room is still available… the two are glad to be together.

That is it for tonight.  How did you enjoy the show?  Sound out in the comments below and let us know!  I am really enjoying it!