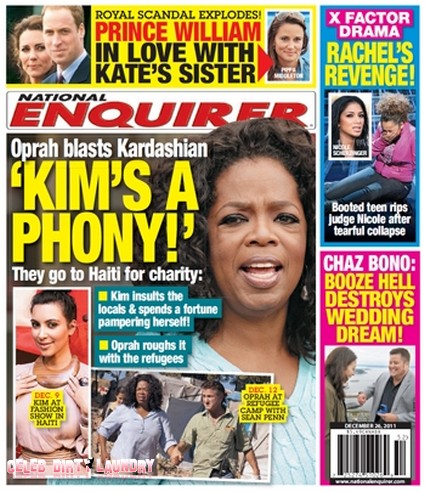 The queen of TV talk, Oprah Winfrey, has come out and bashed Kim Kardashian for being a total phony according to the National Enquirer. Kim has made a fake charity trip to Haiti in a desperate bid to rebuild her crumbling image and Oprah calls Kim out for using this worthy cause for her own selfish ends. Kim is so desperate for some good publicity and positive press – her image is so tarnished after filing for divorce from Kris Humphries – that the spoiled prima donna famewhore flew to earthquake ravaged Haiti for supposed charity work.

Kim went to Haiti with the charity group We Advance, along with her mother, Kris Jenner, and Prime Suspect star Maria Bello, who co-founded the organization. Kim made the trip to support the group, whose Web site says it’s “a movement to advance the health, safety, and well being of women throughout Haiti.”

National Enquirer has more:  Kim insults the locals & spends a fortune pampering herself while Oprah roughs it with the refugees.  Details of how Oprah was at the refugee camp with Sean Penn and Kim was at a fashion show!

It’s great to see a respected celeb come right out and call Kim on the carpet for her disgusting behaviour. We had to endure her all-for-profit-wedding to Kris Humphries – subsequent fake marriage to provide content for her reality show – and then very real divorce filing to peak her skanky publicity. Of course this backfired on Kim who is reviled by the public – so she figured she’d go to Haiti to try to fix her image – but Oprah’s having none of it.

Oprah is one smart woman and she sees clearly how Kim and her mother, Kris Jenner, conspired to raise the fortunes of the Klan all starting with Kim’s hugely profitable wedding to Humphries. Oprah is the type of person who looks at what people do, not what they say, in order to determine their true motives and character. On these grounds Kim comes up as a big phony famewhore.

Can you imagine Kim stooping to this level – pretending that she cares about the plight of Haitians as they try to rebuild a society practically destroyed by the deadly 2010 quake. Well leave it to Oprah to tell us what we already suspected – Kim is a phony!