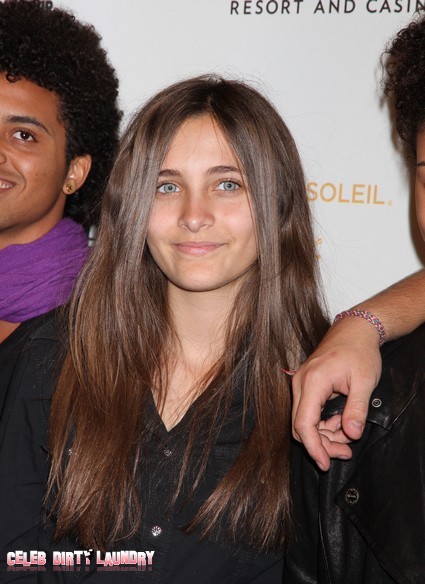 Paris Jackson has told Ellen DeGeneres that she was disturbed as a child by lengths that her dad, Michael Jackson, went to in order to protect his children’s privacy. Paris said that she felt it was “stupid” when her father made her wear a mask.

Michael, wanting his children to be spared the over-exposure he suffered as a child superstar, used to make his children, Prince Michael, 14, Paris, 13, and nine-year-old Prince Michael II – also known as ‘Blanket’ – cover their faces in public for protection from the paparazzi.

Of course Michael was not exactly thinking too clearly, was he? With names like Prince Michael and ‘Blanket’ and a dad taking Propofol to get to sleep at night did Michael Jackson think he was doing his best to provide a normal environment?

Paris said: “I’m like, ‘This is stupid, why am I wearing a mask?’ But I kind of realised the older I got, he only tried to protect us and he’d explain that to us too.”

On the ‘The Ellen DeGeneres Show’, Paris said: “I do have like a regular childhood. I mean, I’m treated the same. When I came to [my new school] they didn’t know who I was. I was like, ‘Yes, I have a chance to be normal.'”

All that lip service paid to being normal aside, Paris is excited and looking forward to taking on her first acting role in the movie series ‘Lundon’s Bridge and the Three Keys,’ in which she plays the titular Lundon.

She said: “My dad was in the movie ‘Moonwalker’ and I knew he could sing really well but I didn’t know he could act. I saw that and I said, ‘Wow, I want to be just like him. I was little. I was younger than ‘Blanket.'”

Paris also reveals she and her father would do improvised scenes together, and she always took on board any advice he gave her.

She added: “We would do improve together. He would give us little scenarios. He would say, ‘OK, in this scene, you’re going to cry,’ and I would cry on the spot.”

Discussing fatherly advice, she added: “He said, ‘If I die tomorrow, always remember what I told you.’ I took his advice and I remembered everything he told me.”

The irony is that now that her Dad is gone, Paris is all over the TV and is becoming a major celeb herself… . Was that Michael’s goal – was that what he would have wanted for her?

What do you think? Please let us know in the comments below.