People Magazine: Meet the Children of 9/11 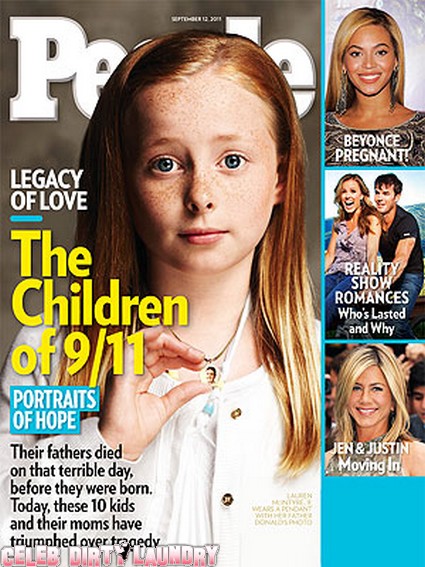 The September 12th issue of People Magazine features the “Children of 9/11”  The 10th anniversary of the September 11th, 2011 attacks where more than 2,700 people were killed is just around the corner.  People take an in-depth look at 10 children who lost their fathers that day.  The  tell how the children and their mothers have triumphed over the tragedy.  These children were the youngest victims, they were not born when they lost their fathers.

People has more: “This is something the whole world felt,” says Jill Garterberg Pila, whose daughter, Jamie, was born six months after 9/11. “As Jamie gets older, she realizes the loss she had was also a loss that affected everyone.  In many ways, they are typical fifth graders who skateboard, play video games and worry about schoolyard crushes.   Yet they are far from ordinary. “

Bravo People! This is such a touching story.  Nice to see a story about something real rather than the regular made up gossip, speculations and innuendos.  To read the rest of these portraits of hope and see photos pick up the current issue of People Magazine which is on stands now!